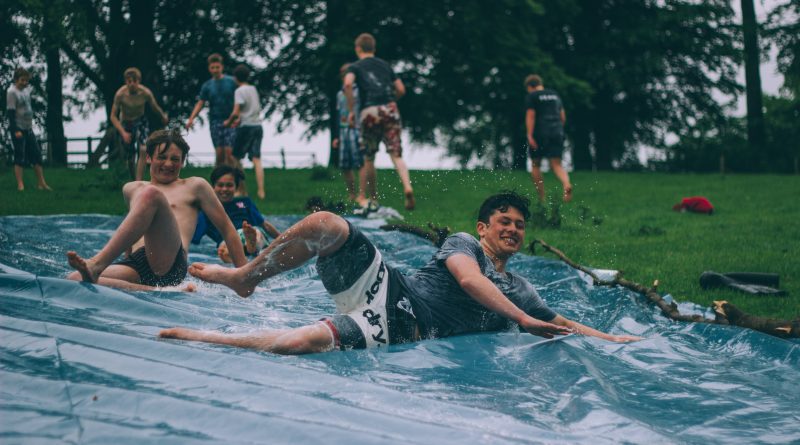 We play to survive. Play refers to our engagement in an activity, either as participants or active observers. It is normally regarded as a fun endeavor that often results in anger and frustration when interrupted. However, I argue that playing is a matter of life and death. Unlike games, which have a competitive element, play is a joyous activity—and when we get bored, we stop or invent new aspects or dimensions of play. Games, of course, can also be joyful, but they differ from playing in the sense that they stimulate an extrinsic motivation, whereas playing is much more intrinsic. We play because we like to play.

Unfortunately, we tend to play less as we age, perhaps because we lose some of the imagination that makes the play worth playing, and we forget the implicit existential lesson within it.

Play is a metaphysical activity.

Today metaphysics and ontology are used more or less interchangeably. Metaphysics explores reality versus appearance, and it is an investigation of the world as the world, that is, as it is versus how it appears to be. Metaphysics, traditionally, has a more relaxed relationship with the distinction between classical empirical aspects versus non-empirical aspects of being—for example, by taking dreams and hallucinations serious, or by addressing questions regarding freedom. In contrast, ontology tends to operate with an ordering ideal due to its religious roots.

I see play as a combination of both of these understandings of metaphysics and ontology respectively. We play with the distinction between reality and appearance when we dress up as Spiderman, for example. When we dress up, we investigate what reality is. The latter is often referred to as ontology, which is concerned with how reality is, regardless of preferences or ideas about its composition. When we play, we indirectly question whether we need to accept this type of architecture of the world, especially if we do not like the building, organization of the rooms, etc., because they hinder us from moving, thinking or living freely.

Consider: if my daughter wanted to dress up as Spiderman, I would ruin the metaphysics of the activity by saying she cannot be Spiderman because Spiderman is a boy. In play we have fun with identity markers—which French philosopher Gilles Deleuze once claimed function as prisons that hold us back from becoming something else. For example, imagine a world where actors cannot play a transsexual, homosexual, or heterosexual character, unless they have the same sexual preference or orientation in their real lives. This is a world of non-play.

Using the Spiderman example, some may say the real issue is not whether Spiderman is a boy or a girl (man or woman), but it is that Spiderman is not real. However, Spiderman is very real because nearly every person who reads this essay can visualize Spiderman. They know who I am talking about. Therefore, we—you and I—are playing; we are testing what is real because if Spiderman does not exist, then who is the blue-and-red figure that you see climbing the walls?

Before someone suggests that I am on a problematic (mental) sidetrack, consider Karl Popper, one of the great philosophers of science, who writes in Unended Quest: An Intellectual Autobiography (1974), “It [Darwinism] is metaphysical because it is not testable.” Whether the world does not change or is changing, static or dynamic, or a metaphysical being versus becoming is not testable. Because metaphysical questions are difficult to prove, philosophers have been playing with these questions since the beginning: What is real? What is and is not?

Philosophies and spiritual practices typically suggest that we, at least many of us, live in a world of illusions. The truth about the world is blurred because we all adopt delusions (e.g., from cravings for junk food to whether what we cannot find on Google actually exists) without testing or questioning them.

For the playfulness of this essay, and because I believe it is true, I propose that the world is organized by the metaphysics of becoming. The world is not prearranged. It is constantly in the process of change. It is not actually organized but organizing. Therefore, we stand on no foundation because what we stand on is constantly being created. In continuation, life is not a game with winners and losers, but a form of play, where some join in and some do not. Playing does not make one a winner in the capitalistic fashion, adorning an individual with a prestigious position or status, or politically correct for acknowledging a person’s specific identity groups. It only makes you feel alive.

If we play along with the ideas presented here, then no one can cheat because we would then be playing something else. Athletes can cheat in sports, but the boundaries are fuzzy. For example, cyclist Lance Armstrong won the Tour de France seven times in a row without cheating because he was not caught by the existing doping control system and he did not use a car to pass through France. However, with time, cycling fans realized that he, like many others, used performance-enhancing drugs. In games, we judge the participants both when they perform and when we compare their performance across time. Games are never-ending quests to measure, weigh, and judge who is the best—how fast they are, how long they are able to go, etc.

Luckily, play has more flexible rules because playing fundamentally confirms the metaphysics of becoming. Playing is never completely stable or closed off to reinventions. Let me clarify this further by contrasting play with games. Many are attracted to games because the rules make it easier to see who is winning, losing, good, or bad. A game produces the same emotions people experience when they watch adventure movies or read books such as Lord of the Rings or Harry Potter, because the characters are fairly easy to classify as either good or bad. Actually, what often causes suspense in this genre is our imagination being triggered, such as when we think a character is bad but she is actually good. In these moments of suspense, the differences between play and game diminish because the strict rules or stereotypical characters are questioned.

Why is playing so crucial? It is not essential in a strict Darwinian sense. We do not need to play to pass on our genes. Notably, we can see seduction as a form of play that takes place between two equals, even when they play an unequal power game. Although, if the seducer truly believes he or she is more powerful or is entitled to the other’s attention, manipulation, rather than seduction, is at play. Again, whereas a game tends to look for measurable differences, play confirms those differences that make it worth playing—these are often more intuitive and unmeasurable, as in a play of seduction.

Play both requires and produces compassion and empathy. We are social animals, as Aristotle said. No one can survive alone. However, being flexible, open, and curious enough to understand other people’s preferences, joys, and suffering requires that we empathize with and care for them or play with them respectfully. That is, the differences are not used strategically to reach a goal—for example, an opponent’s weakness in a game—but rather the differences are respected to make room for them. To develop this capacity, we must return to metaphysics.

If play is an example of change and becoming, where only one way of doing things does not exist, then by playing, we maintain our childish openness and curiosity because we cannot predict what is coming. Play can minimize the categorization of the world into different tribes that tend to identify themselves negatively. For example, I am not X. In games, many are tempted to cheat to gain the glory, prestige, and status that comes with winning or belonging to certain attractive social groups or identities. They adopt an us-against-them mentality. However, when we play, we play. When I play, my play is not about me, but it is about us, all of us. When we play, we are in it together. When we play, the idea of a permanent or authentic self dissolves. Playing helps me see that “I contain multitudes,” as Walt Whitman once wrote. Playing helps me become worthy of what is happening. It makes us alert and aware of the various movements of life, allowing us to go where life takes us.

Therefore, we play to survive, and people who do not play, live as if they are already dead.

So You Think There Are Laws in Nature?