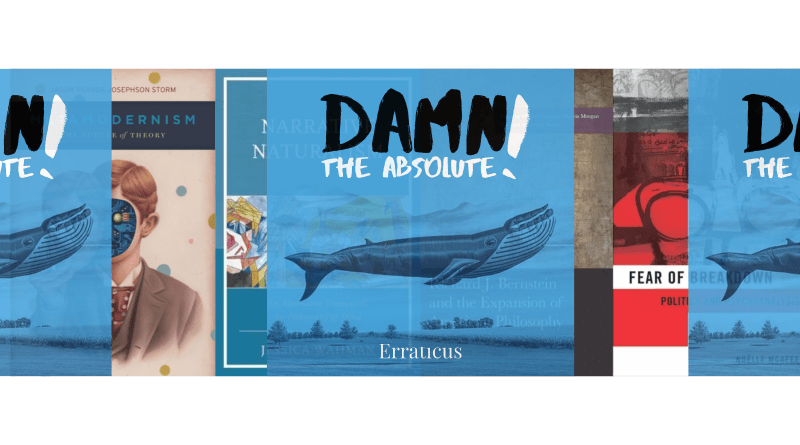 Two years since the idea for Damn the Absolute! was first dreamed up, I’m thrilled to announce the upcoming release of Season Two. We’ll explore similar territory, and, hopefully, tread new paths, unstiffen some thinking, and see if we can’t embrace a bit more uncertainty in the world.

In personal news, during the off season, I made a few thousand mile move from Cascadia to Southern Appalachia. It’s great to be near family again, and to have new opportunities to put some of these ideas into practice.

Looking Forward to Season Two of Damn the Absolute!

You can look forward to new episodes about democracy, community, permaculture, epistemology, and pluralism. And, of course, plenty of air time will be dedicated to dissecting pragmatist thinkers like William James, John Dewey, and Richard Rorty.

Our first cadre of guests includes:

We are still rounding out and finalizing our guest list for Season Two, so please, email us at damntheabsolute@erraticus.co with your recommendations.

Season Two launches Wednesday, February 16th, so be sure to catch up on the conversations with last season’s guests.

Here’s a recap of our inaugural season.

Recapping Season One of Damn the Absolute!

We kicked off Season One of Damn the Absolute! with an introduction to Richard Rorty, one of the most influential pragmatist philosophers of the past half-century. Philosophy professor Adrian Rutt gives a tour of Rorty’s remedies for leftist political movements in the twentieth century, and beyond.

S1E02 Toward a Politics of Uncertainty w/ Daniel Wortel-London

Continuing the trend of pragmatist insights into political philosophy, Daniel Wortel-London makes the case for a political worldview that begins with uncertainty as the animating value. He draws heavily from the philosopher John Dewey to demonstrate how we might engage in politics in a less dogmatic and more intellectually humble way.

Turning an eye to the tensions between global forces and localism, urban designer Jaime Izurieta advocates for placemaking and the benefits of small scale, envisioning a globalism in service of the local, rather than the extractive alternative.

We grappled with questions of God, religious disagreement, and whether there’s such a thing as religious expertise. Philosopher Helen De Cruz pulls insights from William James, among a bevy of other thinkers in an attempt to clarify the differences between those who have religious experiences and those we understood to be experts on religion.

To push back against narrow constructions of what physical education (PE) is about, educator Nate Babcock articulates a view wherein PE is an embodied microcosm of what it means to be a democratic citizen. He employs the concepts of bodyfulness, corporeality, and phenomenology to critique prevailing methods used in schools.

By placing the philosopher Emmanuel Levinas alongside William James, we find two complimentary philosophies that help to strengthen the weaknesses of the other. Philosopher Megan Craig uses the two thinkers to forge a moral philosophy that eschews moral codes, axioms, or formulaic laws too detached from the messiness of life.

Credited with coining the term pragmatism and many of its originating ideas, Charles Sanders Peirce’s philosophy was built around the notion of “a community of inquirers,” guided by love. Philosopher professor David O’Hara connects the “Principle of Peirce” with a call for greater inclusion and compassion in our collective pursuit of truth.

We got our hands a bit in the mud discussing small-scale agriculture, back-dropped by the apparent cracks in global capitalist institutions, including industrial farming. Both a sociologist and farmer, Ashley Colby champions a model of social change that emphasizes lived practices and concrete consequences over theoretical concerns and ideological commitments.

Trust in political institutions in the United States has been rattling and declining for decades, worsened by polarization. Political philosopher Kevin Vallier offers his solutions for how liberalism can restore social and political trust.

In the history of education, mass schooling is a relatively recent development, with many people campaigning for its major reform. Concerned with the school-to-prison pipeline and the ways conventional schooling fails to meet her children’s needs, Tiersa McQueen advocates for unschooling, or self-directed learning, as a worthwhile alternative.

Returning to the philosophy of Richard Rorty, we examined some of his political predictions for the twenty-first century. Philosophy professor Jacob Goodson explores some of the problems with these seemingly prophetic writings while also pleading for a greater concern for the poor.

The notion of lived experience has entered mainstream discourse. However, it’s a wildly conflated term. Philosopher Henriikka Hannula explains its connection to historicism and the role hermeneutics plays in the human sciences.

S1E14 A Tool for a Pluralistic World w/ Justin Marshall

Galvanizing consensus in a diverse society is incredibly difficult. Enlisting pragmatist thinkers such as Charles Sanders Peirce, William James, and Richard Rorty, philosopher Justin Marshall valorizes pluralism as a tool for better coping with the challenges we face in democratic contexts.

Contrasting with the market or the state, the commons offers an alternative for resource management. Neal Gorenflo, executive director of Shareable, details the history of the commons and what benefits it offers in the twenty-first century.

Human flourishing and the well-being of non-human animals is deeply intertwined, but it’s unclear how we can ethically benefit one another. Philosopher Ike Sharpless delivers a freewheeling conversation regarding how we might better integrate non-human animals into our social and political systems.

Perhaps the most universally pressing issue of our time, there isn’t an aspect of society untouched by climate change. However, our conversations about which solutions are most effective can be quite unproductive. Co-founder of the Nori carbon removal marketplace, Ross Kenyon suggests we need a pluralistic approach if we’re going to make progress.

We examined stoicism as a life philosophy relevant for us moderns. A contributing editor at Erraticus and educator, Derek Parsons presents a friendly overview of this ancient moral system that places reason at the heart of the human condition.

Another life philosophy, Buddhism can also be understood as a practice. Award-winning author and Buddhist practitioner Charles Johnson argues for Buddhism as a radical form of liberation, particularly for Black Americans.

In the finale, we explore a question central to the entire season: Can pragmatism help us live well? Joined by philosopher John Stuhr, we considered the ramifications of treating pragmatism as “a season of belief” or fashion, and the implications it has for the many problems we face in American society.

Once again, thank you for your dedicated support of Damn the Absolute! and the Erraticus community. I look forward to spending another season with you.

And, as Charles Sanders Peirce says, “Do not block the way of inquiry.”