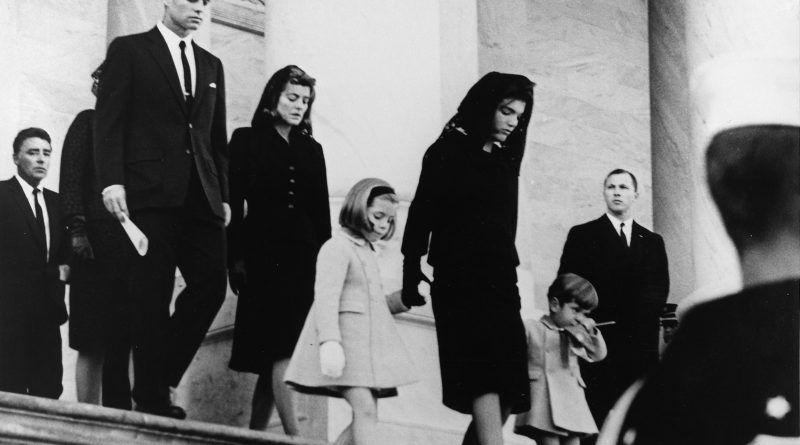 “It was tradition and ceremony—a severe formalism of lamentation as in Aeschylus’s Libation Bearers—that reordered the nation’s blasted and scattered emotions after the shocking slaughter of its leader,” writes Camille Paglia in her 1994 essay “Mona Lisa in Motion: Jacqueline Kennedy Onassis,” praising the former first lady’s masterful management of her husband’s assassination in the eyes and spirit of the nation. We are once again facing a crisis, though this time a global one—fitting for our cosmopolitan era. Tragically appropriate as well is that it is one to which the most helpful response is social distancing and self-quarantine, exacerbating in a time of great anxiety the loneliness endemic to our already-atomized age.

Paglia’s use of the words “blasted and scattered” to describe the feelings of Americans in the wake of that tragedy evoke the images—captured and preserved on film—that have since become ingrained in our cultural memory. While John F. Kennedy was not the first president to be assassinated in office, the effect of his presence on television in the American psyche should not go overlooked when considering the country’s response to his murder. Though President Eisenhower had previously held a press conference that was filmed and later televised, President Kennedy was the first to address the nation on live television without delay or editing, and many consider the televised Kennedy-Nixon debates to be the key turning point of his 1960 campaign. The medium allowed him to enter the homes of thousands of families in not just sound but in moving image, penetrating the nation’s consciousness in a manner even Roosevelt in his famed Fireside Chats could not hope to achieve. What bitter tragedy that it would be for the same reason that he became such a part of Americans’ identities that would then make it possible for them to watch, frame-by-frame, his heartbreaking end. But on television they could watch, too, the remarkable state funeral that channeled their grief to a single focal point—solemn and dignified, and set against the backdrop of the nation’s capital—and achieve the catharsis necessary to begin healing their shaken spirits.

As some Americans are quarantined and many more practice social distancing in the coming weeks and months, we are sure to experience uncertainty, restlessness, and significant human tragedy as COVID-19 spreads across the country and wreaks havoc on the global economy. The source of our suffering is invisible to the eye and ubiquitous; there is no established ritual to assist us in channeling our fear and despair, no single body that may be laid to rest as there was in the case of President Kennedy. We have not even a mater dolorosa to preside over our despair, as we did then with the dowager first lady. Without a clear vision of the future and so much at stake, we face not only the physical threats of the coronavirus but also that of an epidemic of hopelessness—one even greater than that which already existed in many parts of our nation.

When I first began mulling the potential role of mythos in this pandemic, I wondered briefly if film and television show production would shut down. Logically, it made sense—but was somehow unthinkable. Yet here we are, with a much larger crisis than the Kennedy assassination and yet deprived of nearly every medium to shape and coalesce what might be called the nation’s “macro-mythos”: public gatherings, the formal rituals of grief, the high-production-value depictions of unifying narrative stories in movies and on TV. Across social media, however—between the latest bleak, breaking news, partisan finger-pointing, absurdist memes, and personal statements of loved ones suffering or lost to the virus—there are stories of people around the world stepping up to contribute their time, resources, and skills to fight COVID-19. Heroic doctors, nurses, and other healthcare professionals in every state risk their own well-being to attend the bodies of the afflicted. Policymakers and civil society leaders across America are working tirelessly to soothe the nation’s economic concerns, and volunteers, innovators, and heads of industry are mobilizing to meet the material demands necessary for fighting the novel coronavirus.

Even if we are not particularly well-positioned to contribute to this war effort, our duty as individuals must then be to have courage and faith, to contribute to the “micro-mythos” through consoling and giving strength to those around us. “Reflecting today on Jackie’s stoical management of self and surroundings in the aftermath of the assasination, we may rue the disrespect with which my Romantic Sixties generation treated the artifice of etiquette,” writes Paglia. “Jackie’s classy grace under pressure, her cool rejection of complaint or self-pity demonstrate the redemption possible in repression, sublimation, and silence.” It’s natural to feel anxiety, distress, and sadness in the face of disaster—but through self-discipline and restraint we can give meaning to our own suffering, and do our part to prevent each new tragedy from becoming a fresh hell by choosing instead to focus on supporting others.

[Read “Why Demonic Forces Are the Best We Can Hope for”]

Eventually film studios will reopen, and the stories of these times will be told in technicolor. Even then, when we are finally able to crowd in theaters and the physical threat of the virus has been put at bay, its scars will linger in the psyche of individuals and of nations. The words “shocked” and “overwhelming” are frequently used together because they describe the neurobiological reality of the brain’s inability to process immense amounts of pain or grief at once. Film, literature, and other art can help us make sense of our trauma, and find meaning that allows us to reconcile it with life after crisis. It is the duty of artists and storytellers—and therefore all of us, as we are a storytelling species—to attend to our mythos, to help each other craft narratives of hope, courage, and resolution to guide us through the nightmarish surreality from which now we can’t awaken, and which later will haunt us in dreams. As Giovanni Boccaccio writes in the introduction to The Decameron, his classic fourteenth-century collection of novellas based on the Black Death in Florence, Italy:

“I recognize that, in your judgement, the present work will seem both somber and painful, for its opening contains the sad record of the recent, deadly plague, which inspired so much horror and pity in all who actually saw it or otherwise came to know of it. But I do not want you to be afraid of reading beyond this introduction, as though you would always be going forward amid continual sighs and tears. You will be affected by this horrific beginning no differently than travelers are by a steep and rugged mountain, for beyond it there lies a most beautiful and delightful plain, which will supply them with pleasure that matches the difficulty of both their ascent and descent. And thus, just as happiness at its limit turns to sadness, so misery is ended by the joy that follows it.

This brief pain . . . will be quickly followed by the sweetness and pleasure that I have just promised you and that such a beginning would not, perhaps, led you to expect, had I not explained what is about to happen. And truly, if in all honesty I could have led you where I want to go by any route other than by such a difficult path as this one will be, I would have done so gladly. But because, without recalling these events, I could not explain the origins of the things you will read about later on, I have been forced by necessity, as it were, to write it all down.”

Like Boccaccio’s travelers we have found ourselves in rough terrain, but we must believe that there will yet come a day when we look upon a “beautiful and delightful plain” and be grateful—if not for the things that happened then at least for the things we learned and the people we became. Given the option, it’s likely Jacqueline Kennedy Onassis would have chosen to avoid her husband’s tragic fate and with it the place she took in history for her actions following his death. It might have been forgiven, even expected, for her to crumple and turn inward. But it was this “baptism by gunfire that deified her,” in Paglia’s words, revealing in her resolve the strength and integrity of her character, and giving solace to a grieving nation—and inspiration to all seeking a model for leadership in times of trial.

Keep a journal and your eyes open. Seek good and be strong. This crisis, like hers, demands that we do our best to be the extraordinary people that can overcome the challenges of these extraordinary circumstances. It demands also that we inspire others so that they may know that they, too, can rise to the challenge; that heroism—and life after so much death—is possible.

Sloane is a writer in Arlington, Virginia. Her interests include art, culture, and politics.

Sloane is a writer in Arlington, Virginia. Her interests include art, culture, and politics.

One thought on “The Mythos of Pandemic”

Become This Delicate Skin of the Earth

A Wishing Stone for Dick