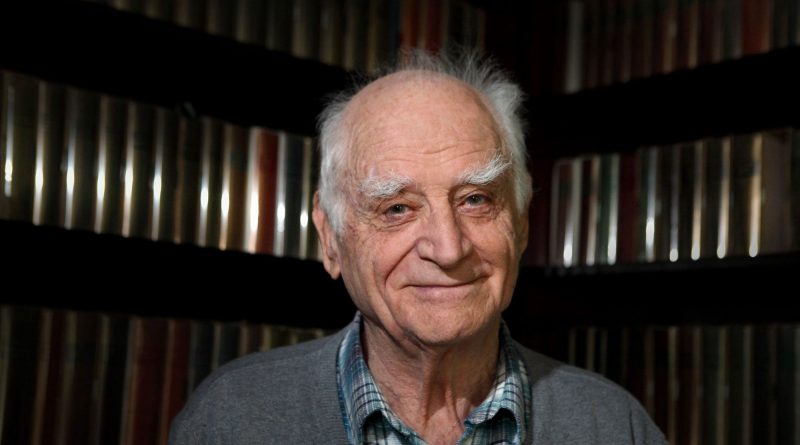 I first crossed paths with Michel Serres in the late 1990s. I was studying philosophy at that time in Copenhagen when I overheard someone speaking about a French writer and philosopher who had a “poetic style.” Shortly afterward, I found a book written by Serres called Genèse (1982). The volume marks a shift in his oeuvre from a more traditional academic style to a more poetical tone. For example, from Genèse onwards Serres rarely used footnotes. It was the beginning of the kind of love affair that philosophy is full of—illustrating that philosophical thinking begins with a vital force like loving friendship.

He was the son of a sailor—a path he too followed by entering the École Navale in 1949. In 1952, he began studying at Ècole Normale Supériere. Significant for a multidisciplinary thinker like Serres, he was a licentiate in three disciplines: mathematics, philosophy, and classical philology. After graduation, he returned to sea, working as a naval officer until 1958. Following this period he began teaching, and his philosophical opus began with his doctoral thesis on Leibniz in 1968. Still, the sea never left him. For example, on several occasions, he described philosophy as a journey through an archipelago, where the philosopher connects what is being separated. For a time, Serres was a professor at Stanford in the US, and in 1990, he became a member of the French Academy.

It was rumored that Serres was an extraordinary teacher. In a 1995 interview with Hari Kunzru, he said,

“I am a professor, and when I give a lecture, in the beginning I am Michel Serres; I am the real person who speaks. I must make a seduction for my students. I may begin with a joke, for example. After that, I must disappear as a person on behalf of the message itself. The problem of disappearing as myself to give way to the message itself is the ethics of the messenger.”

What is worth noticing about this quote is how Serres steps aside to give way to the message. Today, unfortunately, the person often stands in the way. We live in a narcissistic culture, where we focus more on who is saying what than what is actually being said and how.

Serres embodied how philosophy requires humility, that is, allowing oneself to be vulnerable. As he wrote in The Troubadour of Knowledge (1997), “[T]here is no learning without exposure, often dangerous, to the other . . . the philosopher-writer tries things out, he essays . . . . Whoever makes mistakes is human. At least he tried.”

In an interview with Bruno Latour published as a book entitled, Conversation on Science, Culture, and Time (1995), Serres explains how he was affected by growing up in the shadows of the Second World War: “At the time one could not work in physics without having been deafened by the universal noise of Hiroshima . . . traditional epistemology still was not asking any questions on the relationship between science and violence . . . the question of scientific responsibility.”

According to Serres, many contemporary philosophers lacked sufficient scientific knowledge. They did not have the capacity to combine the humanities and sciences. Still, I think it would be wrong to suggest that Serres actually developed an ethic; rather, his work should be seen as an ethical exploration of how we can match our own inventions. He was ethical in the way his friend Gilles Deleuze, another French philosopher, defined it in The Logic of Sense (1969): “to become worthy of what happens to us.”

Philosophy is about inventions. An invention is a temporary foundation upon which a future generation can invent. In Troubadour of Knowledge, he wrote, “philosophy devotes itself to anticipating future knowledge and practices on a global scale . . . a philosopher establishes a ground that will found local inventions to come.”  In that sense, Serres was part of the family of American Pragmatists like William James, who understood truth as what is better for us to believe. Instead of believe, Serres would use the word convince.

In one of his latest publications, an autobiography called Figures of Thought (2015, Spanish translation), Serres writes, “A thinker is a performer, a troubadour. Imitation repeats and this reflection returns. Discovering doesn’t happen often. Thinking is what is scarce.” The problem with imitating is that it reproduces the same, what is already known, whereas Serres wanted to test, experiment, and experience the unknown.

Thinking is a rare invention that has nothing to do with the newness in marketing because, unlike marketing, the goal of philosophy is to end all end-goals. His philosophy was nomadic in the sense that he did not know where he was heading, but he always knew from whence he came.

Reading Serres is, at least for me, educational because he understood literature, history, philosophy, and science. Yet, he stressed that science alone cannot liberate the human being. Quite the contrary, often we—people in general—hide behind science, as if the Internet itself was producing atrocities like child pornography, instead of acknowledging that we—human beings—put it there.

In his book Statues (2015), Serres shows that human sacrifices had been going on since ancient times and were still ongoing. The world is literally founded on death! Every time someone dies, we naively think that this is a new beginning. And yet, the only way to overcome climate problems, war, terror, immigration conflicts, and financial greed is to reestablish our bonds to the earth, to experience how we are connected with the world.

In short, we should not be bound by anything beforehand (e.g., norms or obligations); rather, we should be free to establish bonds that allow free thinking—that is, love or vital connections with the earth, with each other.

This can also be said in another way. What the philosopher seeks is wisdom, which comes from mixing or blending oneself with the world—by tasting it. As Serres says, “[T]he word sapiens, which the Romans used to translate the Greek sage . . . derives from the verb that means having taste.”

The philosopher invents a space in which we can taste the world freely. There can, as Serres mentions in several places, be no privileged direction for our thinking. “Learning launches wandering,” as he stresses in The Troubadour of Knowledge.

A recurring theme in Serres’ work is that science consists of its own epistemology. He did not operate with an external ultimate reference or from a meta-language; the world itself was the model. According to Serres, there is nothing deeper than the ornament. In both The Five Senses (2008) and The Birth of Physics (1980), he illustrates that recognizing the world is becoming it—that is, by taking the same form. For example, we use our five senses to incorporate its qualities. Serres expresses this in another way, drawing from the mathematical notions of structure and network, suggesting that each point in a network is itself a network. A network is networking. Nothing is static. Similarly, he coined the concept mixed or mingling bodies, referring to when the observer and the observed melt together: in other words, when the observer is structured similarly to what he or she observes. This underlying idea may also help us understand his argument in his ecological work from The Natural Contract  (1990), in which he argues that we need to overcome the distinction between subject and object that, unfortunately, reduces nature to the object for the human subject. Nature should have the same juridical rights as human beings because nature is part of us.

In his final years, Serres wrote several shorter books addressing more popular issues in society such as the financial crisis and young people’s use of mobile phones. In Thumbelina (2012), for instance, he describes how the Internet is changing social relations such as how we interact, teach, and learn. For him, there was something liberating in the Internet, a place with fewer rules or laws, a space of opportunities.

Serres was a philosopher of communication, who was interested in “spaces of transformation” or “what exists between,” as he writes in The Parasite (1980). Emphasizing that there is no origin, no first cause, he asserts, “In the beginning was the noise,” not the word, but chaos. It was a chaotic diverging of paths or clinamen that pointed in several directions. The world is an open network with many entrances and exits, where each intersection—perhaps—is where we become consciously aware that we are part of something bigger, something dynamic, and something that is alive.

In the interview with Latour, he says that the word “author . . . comes to us from Roman law and means ‘the guarantor of authenticity, of loyalty, of an affirmation, of an oath . . . . [P]rimitively it means ‘he who augments’—not he who borrows, summarizes, or condenses, but only he who makes grow. Author, augmenter . . . everything else is a cheat. A work evolves by growing, like a tree or an animal.” This quote offers profound insight into the practice of Serres’ philosophy of affirmation. I think his body of work—or what I am familiar with of his 70 or 80 books—is an act of loyalty to life, to the earth. He was not only a beautiful thinker but also a life-affirming one who can best be described as a poetic philosopher. His style was emphatic—not just with other people, but with nature or life itself. He was optimistic in a compassionate way that emphasized that we—all of us—can only survive if we care for one another.

Serres is no longer alive, having died earlier this month. Still, he is with us. After all, Serres is—to use one of his many metaphors—a joker. As in a game of cards, the joker is both nothing and everything. Now, he has stepped aside, but not to become empty or nothing but rather to be formed.

Love in the Hands of Hate Groups: The Marketing of Bigotry