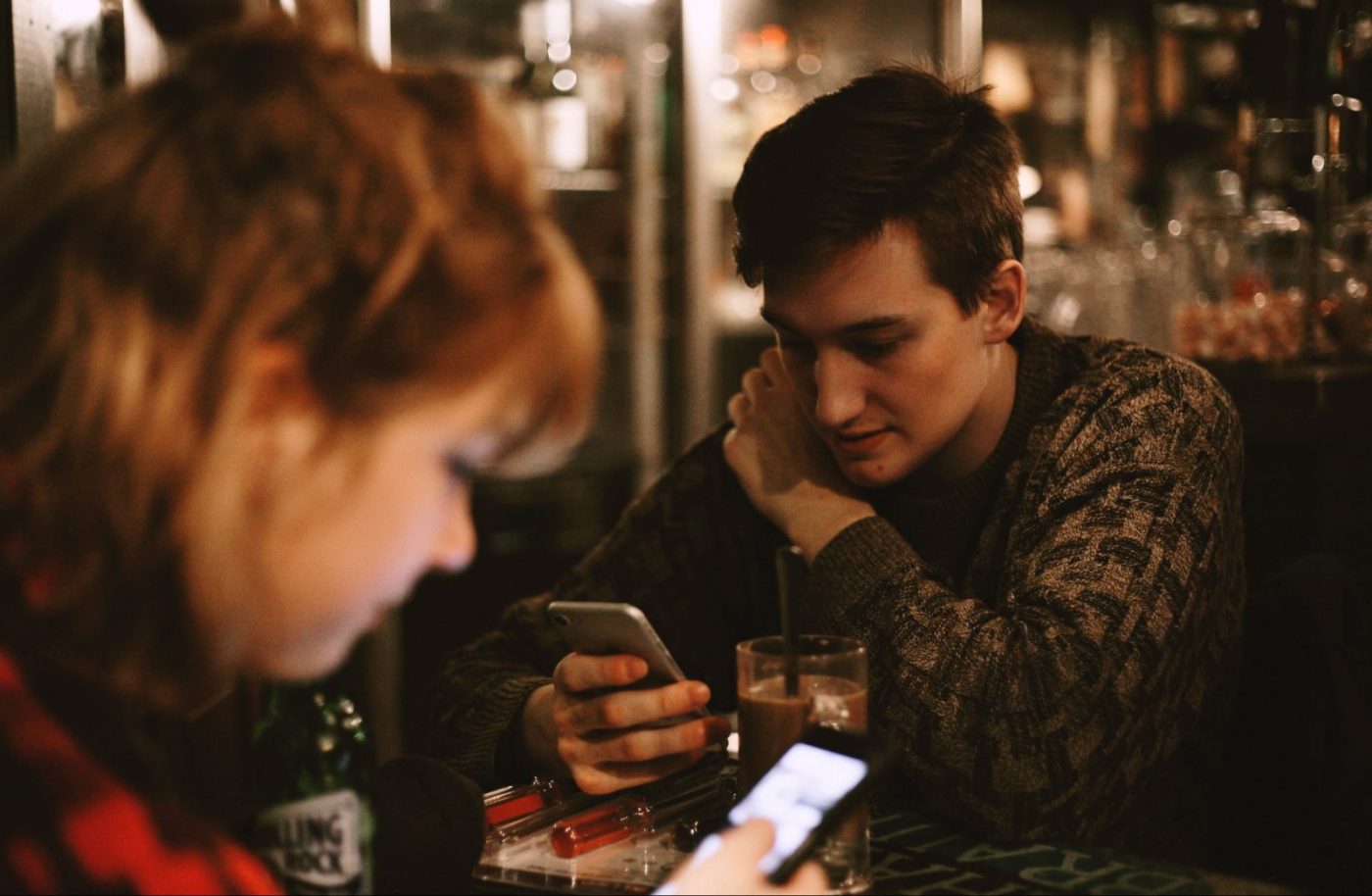 My iPhone is ringing. There’s the briefest moment of distaste upon the realization that it is someone who could have easily texted instead, thereby avoiding my having to actually take the time to speak to the person. This is a far-cry from remembered days at sixteen years old wishing for the house phone to ring for me. What exactly has changed?

Recently, I found myself reading a critically acclaimed, Young Adult dystopian novel, M.T. Anderson’s Feed. In this futuristic story, humans have practically embedded their smartphones into their brains, with a constant feed of information, advertisements, and chat communication streaming through to their minds directly—astonishingly reminiscent of Facebook, given that Feed was written before the site even existed.

Humans no longer needed to be smart, because if they didn’t know something, the feed would immediately serve it up on a platter accompanied by a large advertisement for Coke. Humans no longer need to speak aloud; they can instantly chat anyone else, anywhere, as long as they have the feed.

This concept is quickly becoming not science fiction, but fact.

As we bring technology closer and closer to us, we push our relationships with real people further and further away. We are losing our grasp of language and our ability to meaningfully engage—really engage—with the people around us.  To quote Farasha Bashir from an essay titled “The Dangers of Modern Technology,”

It is the unfortunate effect of the Information Age which, though it has undoubtedly brought people living halfway across the world closer together, it has also led to less interactions between people as machines and technology are conducting those services that previously required human communication.

As technology has advanced, the way we typically communicate with others now requires a conduit through which to transfer that communication, emotionally distancing ourselves from real interaction. If there’s service and our phones aren’t dead, we are constantly browsing or posting or tweeting or texting, and suddenly, we are no longer part of our own surroundings, because we are not participating in them. We are mentally and virtually elsewhere. Technology, while certainly not a wholly bad thing has provided the newest generations with instant gratification, an unrealistically optimistic and jealousy-inducing view of their peers’ lives on social media, and the need to be constantly stimulated without being personally engaged.

If there’s service and our phones aren’t dead, we are constantly browsing or posting or tweeting or texting, and suddenly, we are no longer part of our own surroundings, because we are not participating in them. We are mentally and virtually elsewhere.

In utilizing mobile phones, laptops, and tablets for most, if not all, waking hours, we have a constant dissemination of information which is simply discarded instead of retained, knowing that it can be accessed at a later time with a simple Google search. No longer is there a need to know how to research or be patient. In fact, in his 2016 article in Forbes, “59% of You Will Share This Article without Even Reading It,” Jayson DeMers exposes the effect of this instant gratification to which we have grown accustomed. This impatience has given way to all information—whether true, alternative, or false—being granted the same time and recognition due in large part to two separate factors: “attention spans are at an all-time low” as well as the fact that “it takes considerably less time and effort to share an article than it does to actually read it. It also comes with greater rewards” in the form of attention from your friends and followers. The reward of reading something is no longer to learn and retain, but to gain attention.

Despite all of this, we must also acknowledge that technology has not only created a global community and the ability to learn more of current events in a single day than those in the Middle Ages did in their entire lifespan, but technology at one point was fire. Technology was the invention of the wheel. This is not the first generation of the First World using some form of technology to distance themselves from others, especially in metropolitan areas with larger populations. A popular 1955 image routinely makes the rounds on social media, portraying a train headed to Philadelphia packed full of men in three-piece suits, nose-deep in their newspapers, decades before the invention of a smartphone. The difference is that a newspaper had a single, fixed purpose. At some point during the day, it was discarded until another one was purchased with newer information, and we retained that information. That is not the case with a smartphone, which has usages that far surpass the newspaper in number and daily importance. A newspaper did not connect you to your family in the event of an emergency or pinpoint your location on the planet at any moment to direct you to your destination or help you file your taxes. The more uses a product has, the less and less we put them down. Yet, this 1950s picture is still incredibly meaningful in exposing a human desire to disconnect when feeling too connected, whether connected in person on a busy train or electronically on the internet. Perhaps that is why we are so easily seduced by it.

This is not the first generation of the First World using some form of technology to distance themselves from others, especially in metropolitan areas with larger populations.

This is not a uniformly black-and-white, clear-cut discussion, nor will it ever be. However, it is the discussion itself that grows more and more important each day, with every new product that hits the market. Instead of augmenting our lives with technology, we are in effect replacing them.

Achieving a natural balance and a healthy distance from our devices is an idea for which we may need to backtrack as a society in some respects. For many of us, we spent our childhoods experiencing boredom at times and that garnered creativity. When we were bored, we created things. We made admittedly terrible drawings and make-believed our days away. This creativity is largely lost in an age of ceaseless communication and attachment to screens instead of life. Boredom has been replaced with constant stimulation, love replaced with text, reading replaced with sharing.

It is sad that in many ways instead of creating and learning, as adults we find ourselves scrolling through newsfeeds to watch another 30-second video of a cute dog that will not be remembered by morning.

Kelley works in management for Amazon and enjoys writing about film, literature, and technology, researching their effects on our daily lives. In her spare time, she loves composing and recording music with her husband, and writing creative fiction.

Kelley works in management for Amazon and enjoys writing about film, literature, and technology, researching their effects on our daily lives. In her spare time, she loves composing and recording music with her husband, and writing creative fiction.

Competition Is Bad for Families but Good for Societies