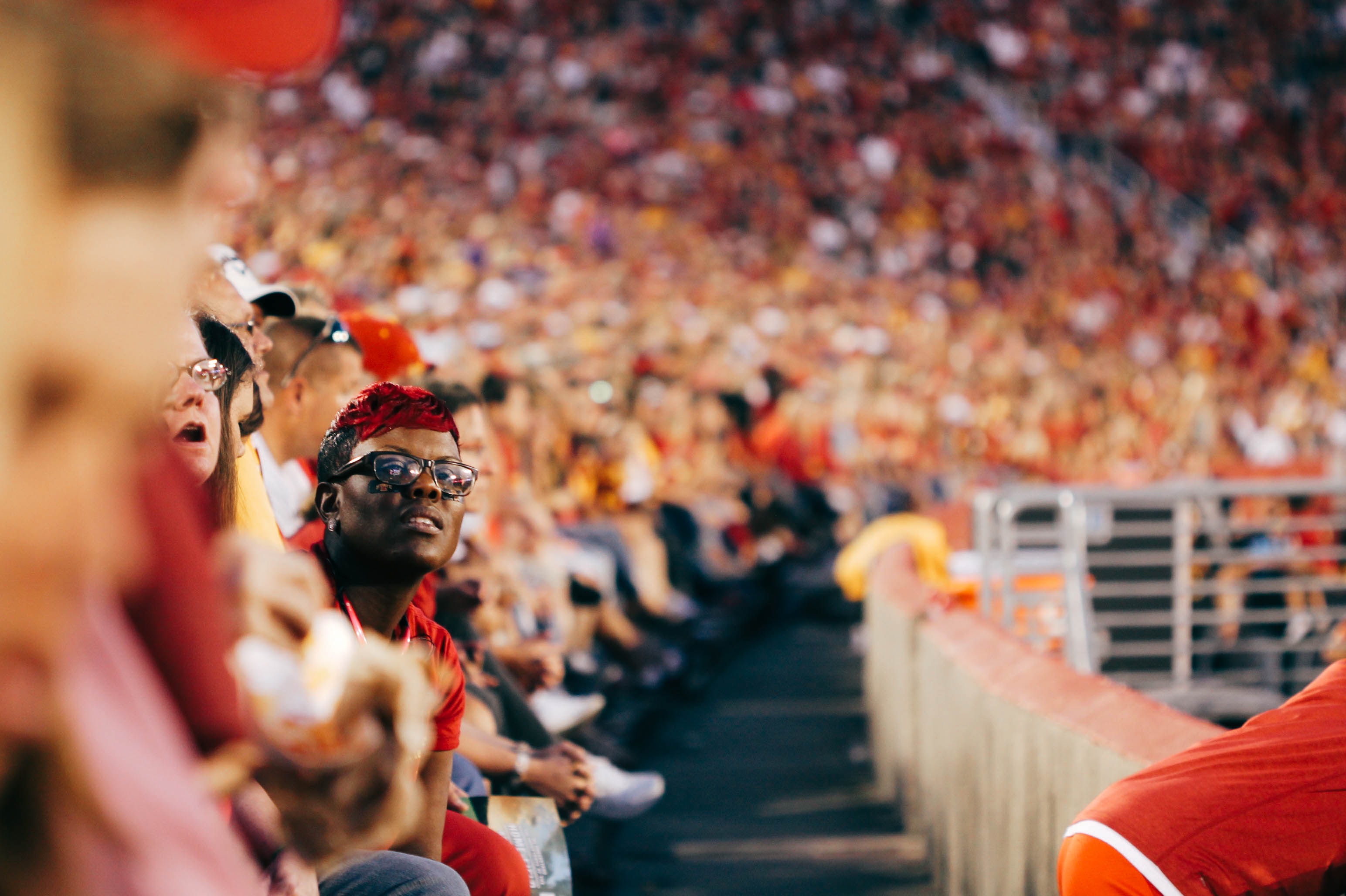 At the beginning of February, more than 100 million people will tune into Super Bowl LI to watch the Falcons face the Patriots. Another 72,000 will be in attendance at the NRG Stadium in Houston. Nearly 1/3 of the U.S. population will watch the same game at the same time cheering on players they’ve never met. Some will glance up with passing interest. Others will wear lucky jerseys and hold their breath until the ball clears the goal posts. Regardless of where you fall on this sports spectrum, you’ll be expected to at least know the score at work or school the next morning. That’s how ingrained in our culture this one annual event has become.

It’s not news that the American citizenry is especially divided right now. We’ve drawn lines in the sand regarding police brutality (Black Lives Matter versus Blue Lives Matter), abortion, healthcare and even President Trump’s inauguration crowd size in relation to Obama’s inaugurations and the Women’s March on Washington. This week alone, we’ve faced incredible growing tension and animosity over immigration through Trump’s newest executive order. We as citizens and as a government need to figure out who we’re going to be in this era, but we as individuals need to also stop villainizing the other side, lumping in people who believe just a little differently than us with those who truly aim to hurt us. We need to find common ground again and relate to each other as people. Sports can be one of those avenues.

Sports can transcend social and geographic barriers. Whether you’re watching from a box or the nosebleed section or via your friend’s cable, you are still part of this collective. The way you experience the game may differ, but you are just as much of a participant. Whether you grew up in poverty and played touch football in an empty lot for something to do on a Saturday or your family had courtside season tickets for the Lakers, sports shaped you. The Lakers fan and the touch football player, west coast and east coast, young and old, conservative and liberal, you are part of this community.

Combine athletics and heart with cultural tension, and players learn to be better than those around them, not just on the field but also as people…Take a community and shatter the heart of it in fluke tragedy, and from that adversity, build one of the greatest underdog stories in football.

Out of luck more than anything, I attended my first ever NHL game recently. And I loved it. I didn’t love it because it was a big televised game, because of the rivalry between the Pittsburgh Penguins and the Washington Capitals; I didn’t even love it because I’m a hockey fan. Quite the opposite, I know so little about hockey, I had to look up nearly every penalty and how much time went into a period. I loved it because I knew nothing. It was fascinating to learn and to be a part of this hive watching sheer athleticism on skates. I am by no means a sports expert, but that night I felt included. I was part of a community with maybe only this one game in common, but it was enough to form a bond.

I watched as an entire arena celebrated Alex Ovechkin’s 1,000th career point less than a minute into the game. In that moment, his success was our own, and we relished in it with him knowing that, chances are no one sitting in those seats will ever reach the same pinnacle. This game wasn’t just for those playing it, coaching it, refereeing; it’s for every single one of us there.

As chanting echoed off the ice, I thought about audience participation in games that, I can only imagine, require ridiculous concentration. Of course, you expect cheers (or boos) during scores or when the refs make a call, but for the few seconds following, that’s essentially downtime while the teams regroup. Why then, do audiences chant during climactic situations when players need the least distraction? Professional players are undoubtedly used to the noise, to bright lights, to adverse weather conditions. Maybe they do actually gain some strength and determination from our cries in the stands, but why do we do it?

We do it to participate, to be a part of that collective, to share that contagious enthusiasm for something you love done well. Barbara Ehrenreich coined the term “collective joy” to describe this phenomenon. Nothing is as heartbreaking as a one-run loss in a World Series Game 7. Nothing is as euphoric as a buzzer-beater during an NCAA Championship. It may not even be your team, but you can’t deny getting swept up just a little in the excitement.

Think of all the film and television storylines devoted to sports (Remember the Titans, Friday Night Lights, One Tree Hill, Rudy, We are Marshall, A League of Their Own, Hoosiers, Rocky, etc). Combine athletics and heart with cultural tension, and players learn to be better than those around them, not just on the field but also as people (Remember the Titans). Take a community and shatter the heart of it in fluke tragedy, and from that adversity, build one of the greatest underdog stories in football (We are Marshall). There’s a reason sports storylines are numerous; they are inherently easy to get emotionally invested in. You want to root for them.

Nearly all my favorite lines from One Tree Hill come from Mouth McFadden, the moral compass of the show played by Lee Norris, but one, in particular, gives me renewed hope every time I hear it:

Say what you will about the ravages of sport in this corporate age where overpaid athletes expect prima donna treatment, but there is still something so unifying about sport in its purest form, when athletes rise above themselves and touch greatness and, in doing so, reminding us all that we also have greatness inside of us (S4, E9).

We don’t all possess the grace, strength, and stamina to be athletes, but sports are, at their most basic level, about people realizing their greatest potential. When they do that, even with a few mistakes along the way, they can accomplish spectacular things.

I don’t deny sporting rivalries can get tense, but as a whole, I still see sports as a unifier. We may participate in different ways from varied perspectives and levels of interest, but we are all part of the hive I felt watching Ovechkin score that point. We can acknowledge greatness even when it comes from the other side (I was actually rooting for the Pens) because it’s impressive and because you can only hope that one day you’ll witness your team do something equally amazing.

Think about someone you know who loves a team you don’t care about. When you see that team’s done well, don’t you get a little excited for them knowing how happy they must be? It’s contagious. There will always be another game, another season for your own team, but in that moment it’s about your friend’s team’s successes. It’s about celebrating that greatness representative of all humans. It’s about hopefulness and community. We should all spend a little more time celebrating that and building stronger communities from its foundation.

One thought on “How Sports Bridge Our Cultural Divisions”