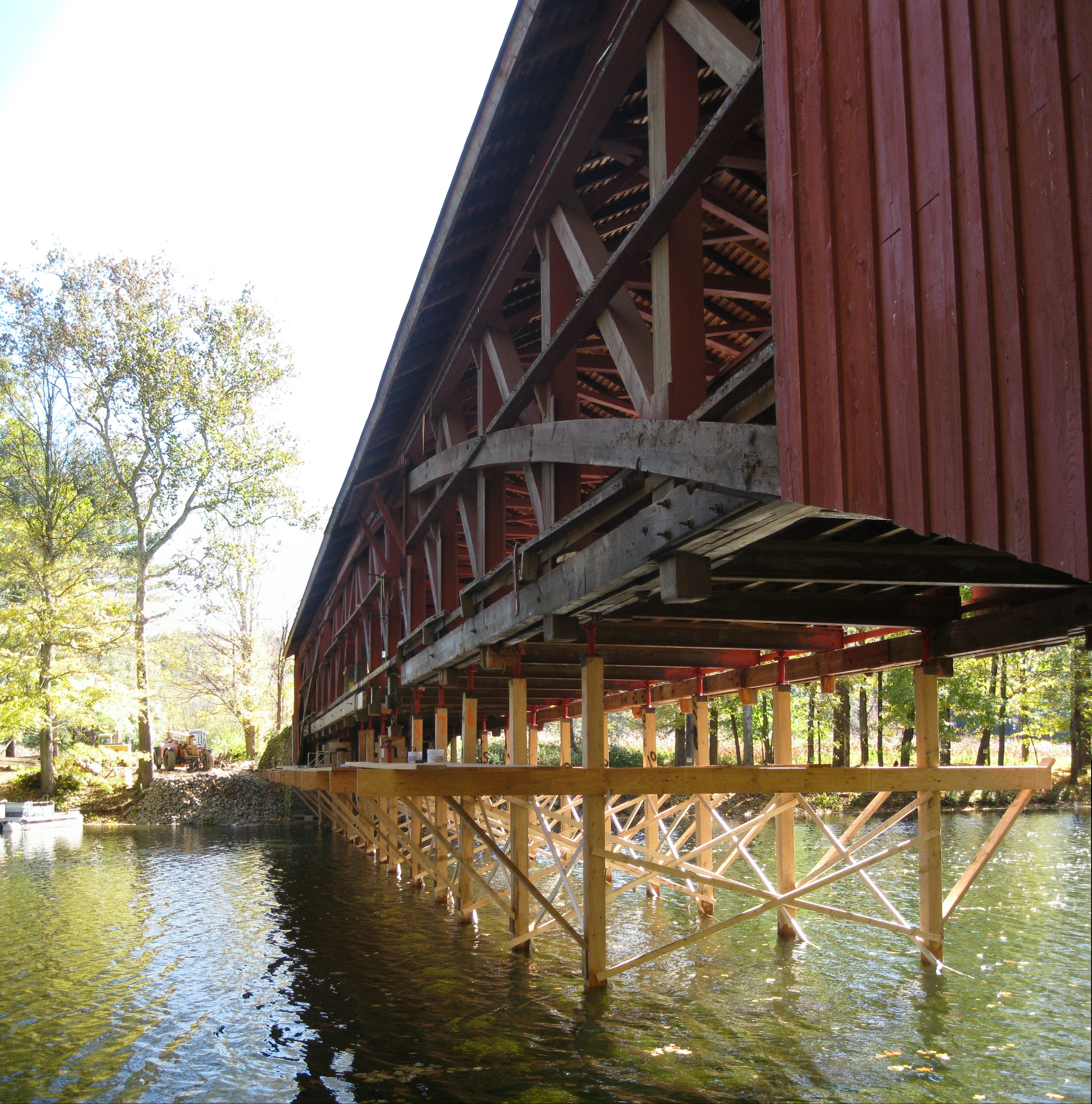 When conjuring up a still-frame of “man vs. nature,” one may imagine a musher dog sledding across a frozen tundra or a pioneer trailing through desolate badlands or a voyager floating down the Congo River into Conrad’s The Heart of Darkness. Yet, no one pictures the Hillsgrove Township of Sullivan County, Pennsylvania. In this small upstate township, the 186-foot-long Hillsgrove Covered Bridge spans the Loyalsock Creek. In its subtle manner, it may be the most striking of all locations.

Few living in the United States today, let alone those visiting, realize the country’s plentiful history of covered bridges. At their most widespread, some 12,000 covered bridges crossed the nation’s streams and rivers, yet by the 1950s fewer than 1,500 remained.

Due to nature’s seasonal temperaments, the life of an uncovered wooden bridge seldom spans more than a decade. Exposure to rainfall rots unprotected joints in summer, and snow and hypothermic temperatures stretch and split them in winter.  The summertime heat alone will bleach, desiccate, and curl naked wooden planks. Encasing the trusses, joints, posts, and slats defends against the elements and makes the bridge’s upkeep easier.

The emergence of covered bridges aided in facets beyond protecting wood trusses.  Given the rise of a creek or stream, horses, cattle, and oxen no longer shied away from crossing these waterways.  As well, the shade yielded by a bridge’s covering allowed pedestrians with their animals and crops to find temporary amnesty from nature’s unforgiving ways.

Around 1820, new covered bridge designs, including the Burr, Lattice, and Brown trusses, had improved, so much so that these newly-minted technologies streamlined travel and trade, justifying the initial investment costs. By mid-century further developments elsewhere in the American economy created cheaper wrought iron and cast iron, and these metals quickly supplanted the use of wooden trusses in all but the most timber-rich areas.

Built in 1800 by the Massachusettsian Timothy Palmer, the first covered bridge in the United States traversed the Schuylkill River by Philadelphia. Moreover, since the 19th Century, Pennsylvania claims the most covered bridges of any state. In 2001, two hundred and twenty-one surviving such bridges stood in 40 of Pennsylvania’s 67 counties.

Moreso, located in the Susquehanna River watershed, Sullivan County in 1890 boosted 30 covered bridges, but today is home to only one-tenth that number. The three remaining—Hillsgrove, Forksville, and Sonestown—were designed and built by the eighteen-year-old Sadler Rodgers circa 1850.

Rodgers stayed loyal to what he knew worked; hence, all three of these surviving covered bridges are similarly constructed. Embracing the Burr Arch truss (patented in 1804 by the New Yorker Theodore Burr), Rodgers proved able to span the nearly 200 feet needed to erect the Hillsgrove Covered Bridge. As well, he could sandwich these Burr arches across multiple vertical king posts on each side of the bridge and tie them directly into the bridge’s abutments through a series of triangular support posts. This structural mix, especially the Burr truss, added greater strength, rigidity, and durability, so much so one should be unsurprised to learn of Pennsylvania’s remaining covered bridges, the Burr truss reinforces 122 of them—more than half.

According to a 1980 National Register of Historic Places Inventory Nomination Form:

The covered bridge is also important in the history of bridge building. The early stone arch bridges were really only practical on smaller streams and then in areas with an abundance of good building stone. The peak of the stone bridge in Pa. can be seen in the Rockville Bridge over the Susquehanna River built by the Pa. Railroad and contains a quarter of a million tons of stone. The covered bridge was the transition from the stone to the cast iron in most places.

All important technologies must be granted the option of becoming passé. In fact, the goal behind any technology should be for it to serve well and to die young. For without this quick, ashen churning of innovation, progress ceases and humankind loses its escape velocity from nature’s enslaving gravitational pull.  To disarm nature and protect the wooden joints from weather, humankind needed a better model of nature and its ways. Yet, yesteryear’s myopia did not serve well this task, for humans were then no more than fettered to nature’s unknowable will.

Today, many are seduced by neo-romanticism and think it behooves humankind to get back to nature, to rekindle man’s earthly kinship. Furthermore, by man’s love affair with science and technology, humankind strayed, and consequently, man’s oldest relationship turned cold and foreign. Yet, these Rousseauian thinkers, who blame the advent of the arts and sciences for the moral degeneration of man and who pine to return us all “back to nature,” fail to grasp nature’s true indifference and humankind’s need to seek elsewhere its own deliverance.

Too often in conversation regarding man’s place in nature, the “back to nature” defender forgets: humankind evolved in one geographical location, at one geological time, to one geo-historic climate. And humankind went forth from the savannah and tamed the wilderness now-known as the rest of the world. Unlike some imagine, humankind did not wander to the corners of the globe unearthing as it went manna from nature’s own heaven. Humankind terraformed earth as it struggled to survive it.

In short, only man’s mind, via the tools he envisioned and crafted, brought to our planet a home.  And only with continued technological advancements will this endure.

All important technologies must be granted the option of becoming passé. In fact, the goal behind any technology should be for it to serve well and to die young.

Within the history of human structures, the transition from the stone age to the steel age required a period of wooden construction, as late as the 19th Century. As charming and romantic as it is to craft a human story wherein the earth’s environment—that is, with its plants, animals, and forests—laid ready its resources for easy utilization, something as rustic as a covered bridge in upstate Pennsylvania should reroute this geolatric narrative.

Humans were not born with their hands in wood or with a harmonious role in the eco-system.  Humankind had to wrestle, battle, rage against this planet so that it could be the now hospitable place we all call home.

So You Think There Are Laws in Nature?